“Since October 2016, I had an incident and my doctor told me my disc shifted and that blocked the nerves responsible for supplying water and blood to my two legs. As a result, I was unable to walk and I used wheel chair for some months”. 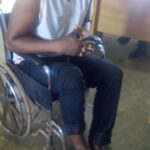 Image of testifier on wheel chair.

“I had visited so many hospitals and went for M.R.I. The doctor then recommended surgery as the only way out.

By November 2017, I was introduced to Nuga Best and I began to undergo their therapy by using their products”.

Image of testifier using the product.

“In less than 2 months, I was able to stand and walk without any support”. 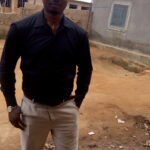 Image of testifier after therapy.

“I thank God for NUGA BEST”.